His favorite shower song: "Here I Go Again" By Whitesnake 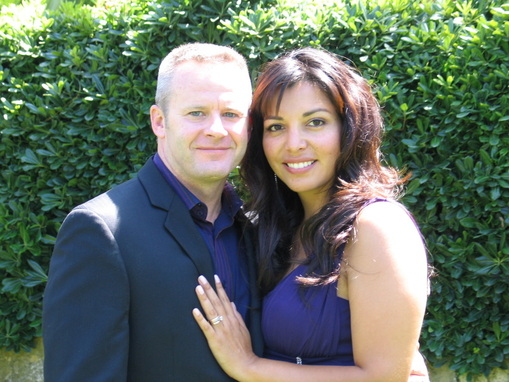 I am Harold's wife and want to take a moment to share some very personal but real heartfelt emotions.

First and foremost, my husband was an absolutely amazing father, husband, son, brother and most importantly my best friend. He was a highly decorated Lt. Colonel with the United States Air Force who loved fighting for his country, more than anything. When we initially met he was assigned to the Pentagon as a Fighter Branch Chief in the Total Force Integration Division. In his career he deployed 19 times and volunteered to do his last tour fighting out of his comfort zone... on the ground.

As a Lt. Colonel assigned to be in Iraq at Camp Liberty, one of his most difficult duties was to notify families when their loved ones were killed in the line of duty. To me, he would express that he always wrote those letters as he would imagine a family member would be proud to read. He also had the honor of making rounds at the hospital where many of our soldiers were tragically injured; he often sat with and encouraged them. My husband also bravely pulled a pilot out of his helicopter after it went down while fighting in this current war. On another occasion his instincts and experience proved faultless and told him to detour his convoy away from an IED that went off just moments later. He protected over 5,000+ troops , led 26 EWO's, performed over 3,000 software updates, and so much more while he was on this last tour. My husband was so courageous; he was known to lead from the front. "That's what I do," he would simply say. Most importantly during his tour Corps Separates convoys and route clearance team troops were 100 percent covered and took no division casualties. "Goal accomplished," he once proudly stated to me. My husband has seen and dealt with more tragedies than any one person or many people should ever have to endure in a lifetime.

I write this with the intention of having him remembered entirely for who he was. A hero. Say what you must, but know that my husband's death was due to not managing with memories of 9/11 well, his last deployment, an exhausting custody battle, and being retired without being recognized. For his retirement, he did not receive an official ceremony and was instead mailed two plaques, a flag, and a letter stating a thanks for his service with an official retired date of April. He received that package in June! Imagine all your hard work and 20 years of experience ending with a letter????!!! To say the least, he was devastated. We were also fighting a custody battle for our daughter who wanted nothing more than to remain living with and being close to her dad. His ex-wife also played a large and constant role in our marital and ongoing financial stress.

On this day, one day after 9/11, my husband just snapped. I cannot tell you why because I wish I knew as well. I will say that we had a fantastic afternoon. We woke up playful and teasing each other. We had an appointment to see a marriage counselor on Tuesday and we recently joined a couples bowling league to improve our communication and strengthen our marriage. We were excited about these upcoming events and made it a Sunday "date" to kick off the week. He dressed and looked amazing wearing a Kenneth Cole shirt and pair of dark-wash jeans, that I bought him just months ago. (I would often tease him and say that not everyone could carry off these sleek designer clothes, and how he always looked great in them!). Due to the operation on his Achilles tendon, he was uncomfortable wearing a particular pair of shoes that day, but he knew that they made me find him incredibly sexy and irresistible and wore them anyways. We shopped in Los Olivos and had a great lunch. We met numerous couples that day with whom we had a great time and I encourage you to keep in touch if you remember us. People complimented us so often on how great we were with and for each other and Sunday was definitely no exception.

We arrived back home and I cannot tell you what caused his emotions to escalate so quickly. I mean, just imagine... you and your spouse have had this amazing day together and suddenly he is standing before you with a gun in his hand. A gun you knew nothing about. A gun you have never seen in your home and ever seen him carry. His threats were directed toward himself, and the gun was not pointed at me. I ran strictly out of fear. I sit here now numb. Thinking of how different things could have been if I had not ran and instead stayed to talk him out of his final, devastating, permanent, decision. And I was not the one who called 911. Dissect this any which way you want, but know that my husband only thought of his family. His daughters. My sons. This just wasn't him. It wasn't like him.

My husband is surrounded by an extremely patriotic family: His father is a former Marine and was the Chief of the Manhattan Fire Department in New York during 9/11. Every fireman knows how close one gets to one another's family and my husband was indeed part of that large family that died on that day. Two of his brothers are presently Chiefs for New York Fire Departments and his youngest brother is a Police officer in New York. His mother is retired; Harry would say that she was "one tough cookie". She adores anything and everything with the American flag on it and proudly voices her pride for this amazing country.

My husband is a great man who took care of his family in every which way a man could. We never lacked anything when he was near. We knew tomorrow was going to be a good day as long as he was there for us.

I wrote this the night I searched your name.  I was angry, hurt, sad, lost, yet I had to do something when I read what was said.  You'll have to be patient with me in writing you something that actually says good bye.  To say it would mean that I acknowledge something that I am not ready to.  Its been five days that you haven't laid down beside me.  I haven't slept much but when I do, I'm on your side of the bed. Lying very still. Careful not to move the way you last left the pillows propped up. I have to laugh a little inside because you KNOW I don't use any pillows and yet you left four on your side for me to lay on.

I am not ready and do not ever think that I will ever complete this entry, but know that I'm right here. Still waiting for you.